Jay has a nice old bike with an interesting story to go with it.


I've got a bike you might consider putting on your blog.
I'm relatively new to the world of bikes (I've been a hardcore car guy since age 4) and I have been doing research and stumbled into your old three-speed gallery.  Now, I've been biking as a method of transportation and recreation for as long as I have been into cars but it never developed into a true hobby until now.  Back at home in the Metro Detroit area, I ride an entry level Mongoose mountain bike that was pretty good to my standards, except for a not-quite-spot-on transmission and plastic ring parts that hold the brake springs that warranted constant adjustment and dis-assembly a couple years ago.  Those problems stopped occurring which probably means I did something right at one point, haha.  I was a total speed demon on this bike, hitting 30 mph many times and also having to replace the rear tire last year.  I just started my second semester of college at the University of Michigan and since I couldn't bring my car here, I found a need for some form of transportation besides the buses that did not rely on other peoples' schedules.  Enough about my background - onto my three-speed.

In the summer of 2012, I was at summer camp and saw an abandoned old bike with a headlight on it caught my attention.  I thought it was really cool but never thought twice about it - that is, until this past semester in 2013.  I wanted a bike here but didn't want to bring and ruin my "nicer" mountain bike.  I also just needed something fun to work on because I left all my Hot wheels customization supplies at home.  There were two abandoned bikes at the architecture school building - a wide-wheeled cruiser and the skinny-wheeled cruiser I had seen the year before.  That was the extent of my knowledge back then.  I thought I could just throw some tires on an abandoned bike and just use it for school without caring much about it.  Long story short, I went with the skinny-wheeled bike and did a bunch research on it.  I found out it was a Raleigh Sports ladies' bike made in either '58 or '59.  Having always been obsessed with classic and vintage vehicles, I called my mom and said "please bring the angle grinder, I need this bike." This started a possible lifelong hobby and from then on, I knew this wouldn't be a "throw around" bike.

I estimated I could probably get the bike roadworthy with my own from my experience working on the bike at home, which ended up being true.  The tires were stuck to the ground and the brake and gear cables were seized so I thought I'd have to replace them all.  It turned out that after I attacked the thing with WD40, everything freed up and all I had to do was to replace the tires.  The original Dynohub still worked, too! Well, I sorta lied.  The bike is actually stuck in 2nd gear which I'm still trying to find a way to fix but otherwise, it's a great bike. It's got a little bit of surface rust but is structurally very solid.  I threw on new tires, rim strips, and inner tubes and ride it almost daily with a can of WD-40 and a monkey wrench on me, even in this Michigan winter.  It rides super smooth.  I replaced the brake pads during winter break because the old ones gave almost no braking power.  I sent it to a bike shop up the street so the owner could drill two holes in the rear dropout and mount a rack.  I sure do turn heads around campus with the big, yellow, incandescent headlight.  Just today, I was socializing with the bike shop owner and he gave me a piece of steel wool so I could take the rust off my rear hub and read the date on it - lo and behold, it has 58 and possible 11 for November stamped on it! I also used the steel wool to polish up the handlebars, headlamp, neck tube, and brake levers which had a lot of surface rust and tarnish.  They're super shiny now.  This is a functional work in progress and I plan to do more restoration work during summer break.  I will still use it as a daily driver because I like the upright riding position there's something special about operating a vintage piece of machinery that has a thousand times more soul than something new.  And hey, if this bike lasted 55 years (and maybe 20 of them abandoned outside,) it'll outlast me under my care.  It's funny, my first classic vehicle/daily driver project is not a big, 'Merican '65 Ford F250 as I envisioned - it's a British bike.

Some pictures are attached and thanks for reading the long "long story short" story!

Have a good day,

P.S. Do you know anywhere I could get reproduction decals for a '51-60 Raleigh Sports? I might have to give it a full new paint job after removing rust.

Still locked up on the post, before my taking 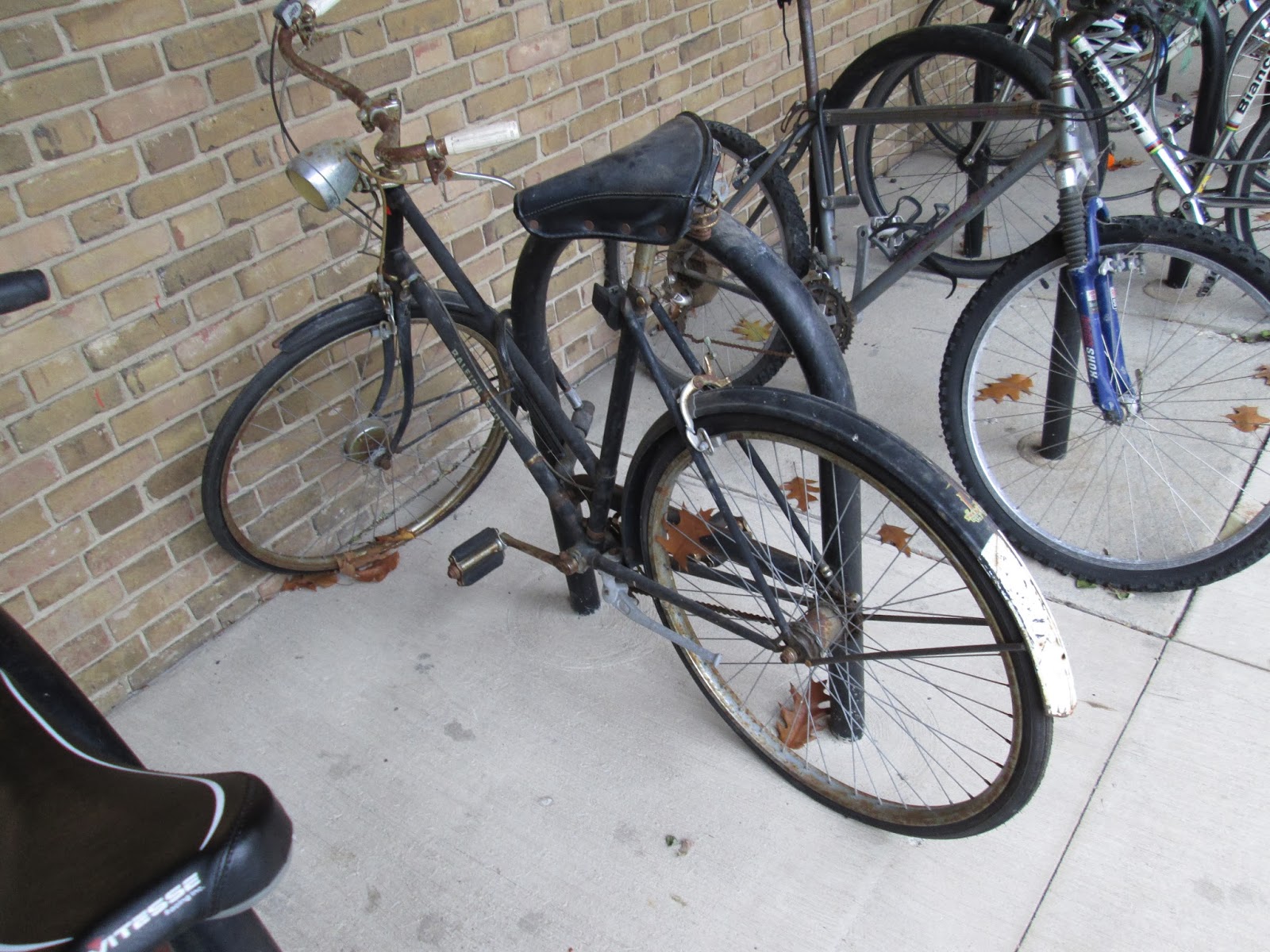 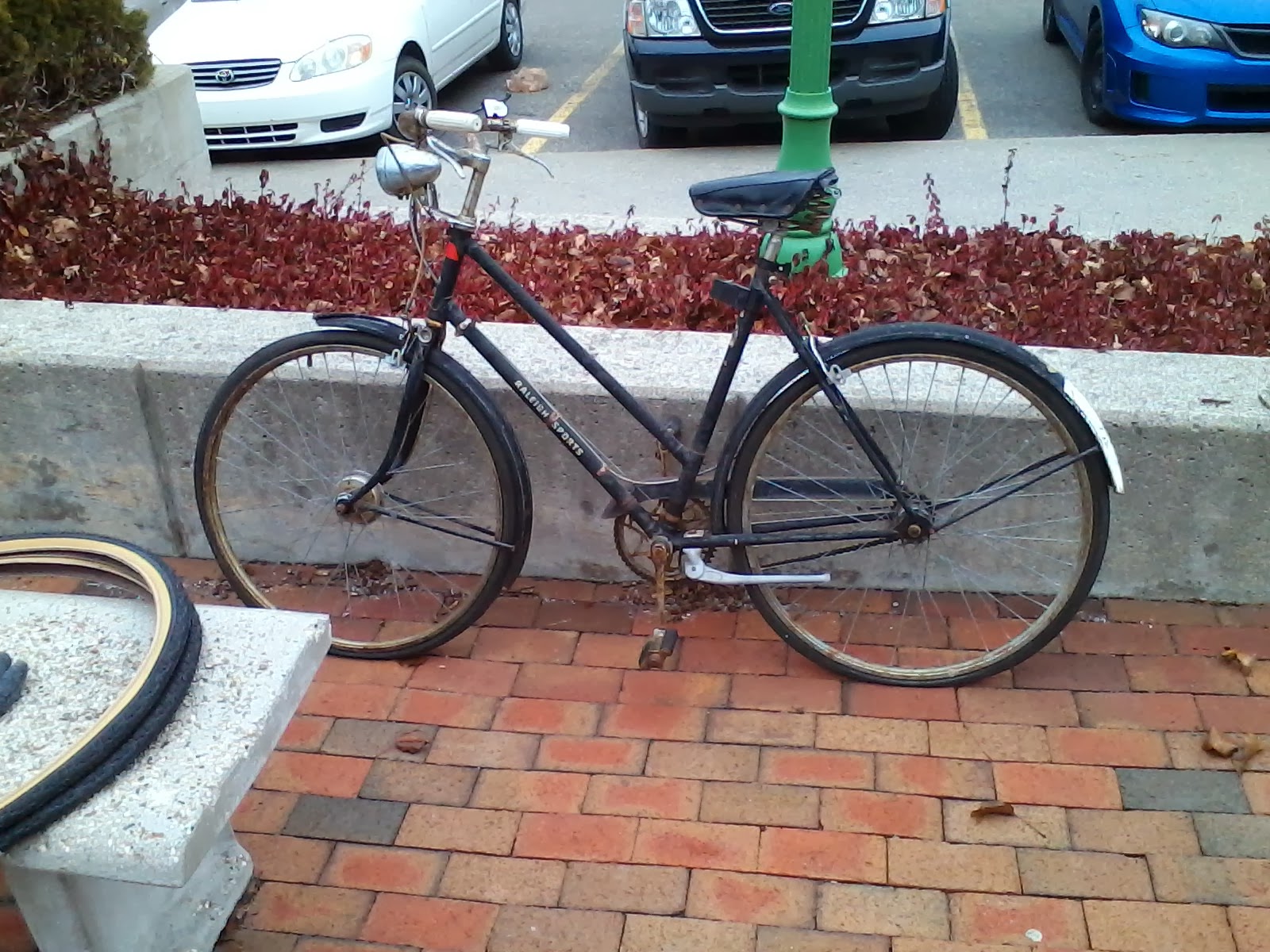 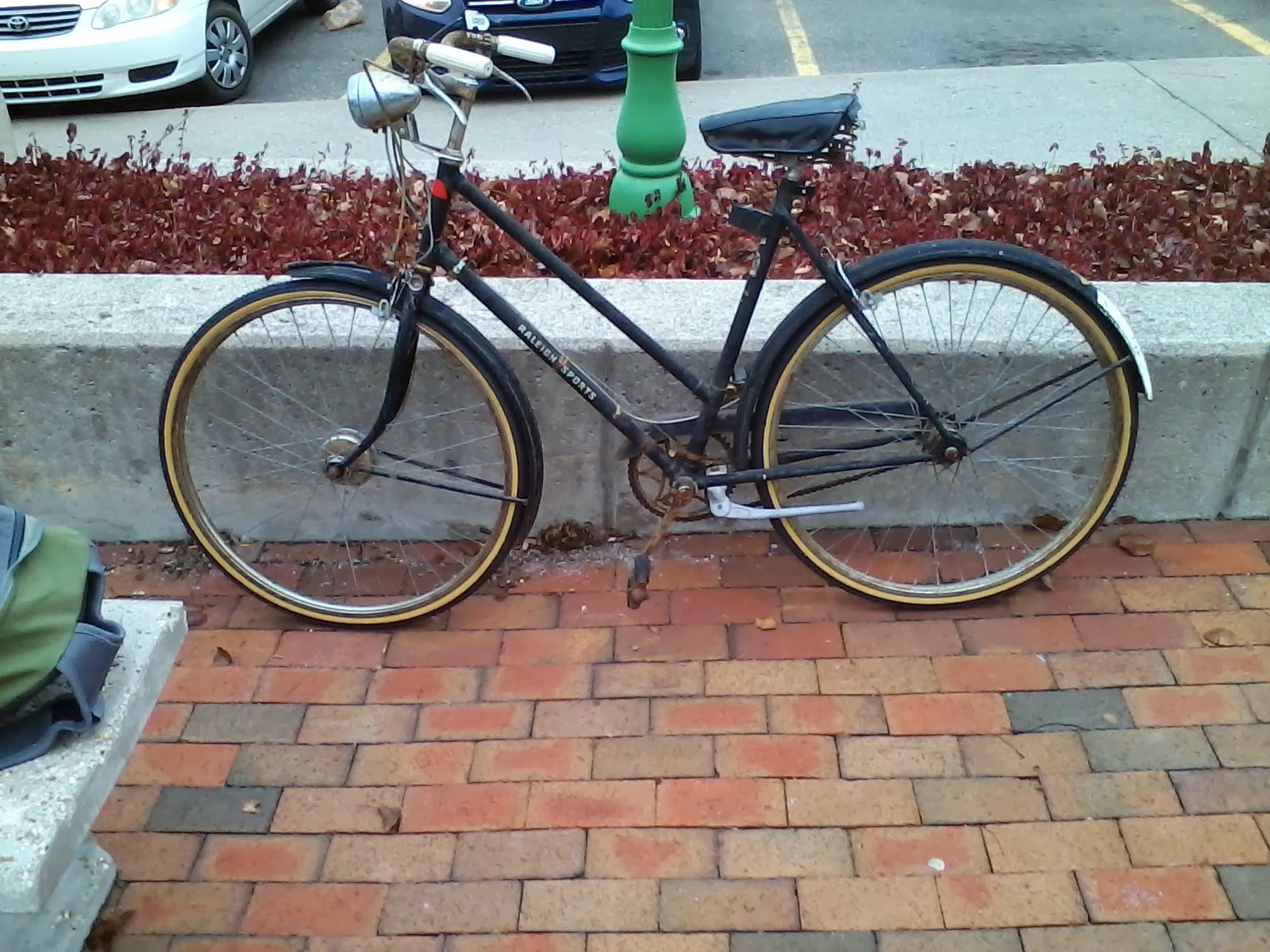 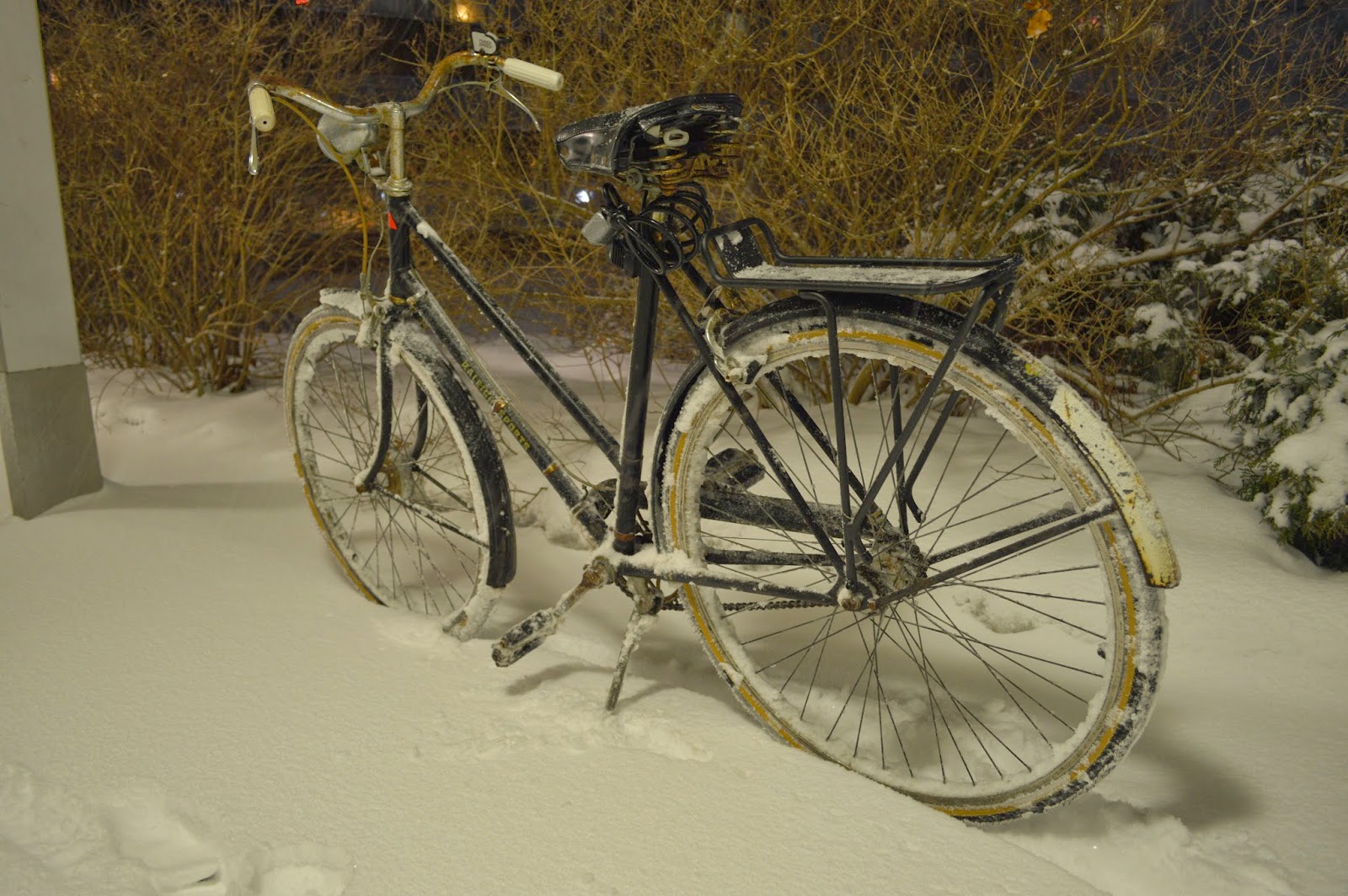 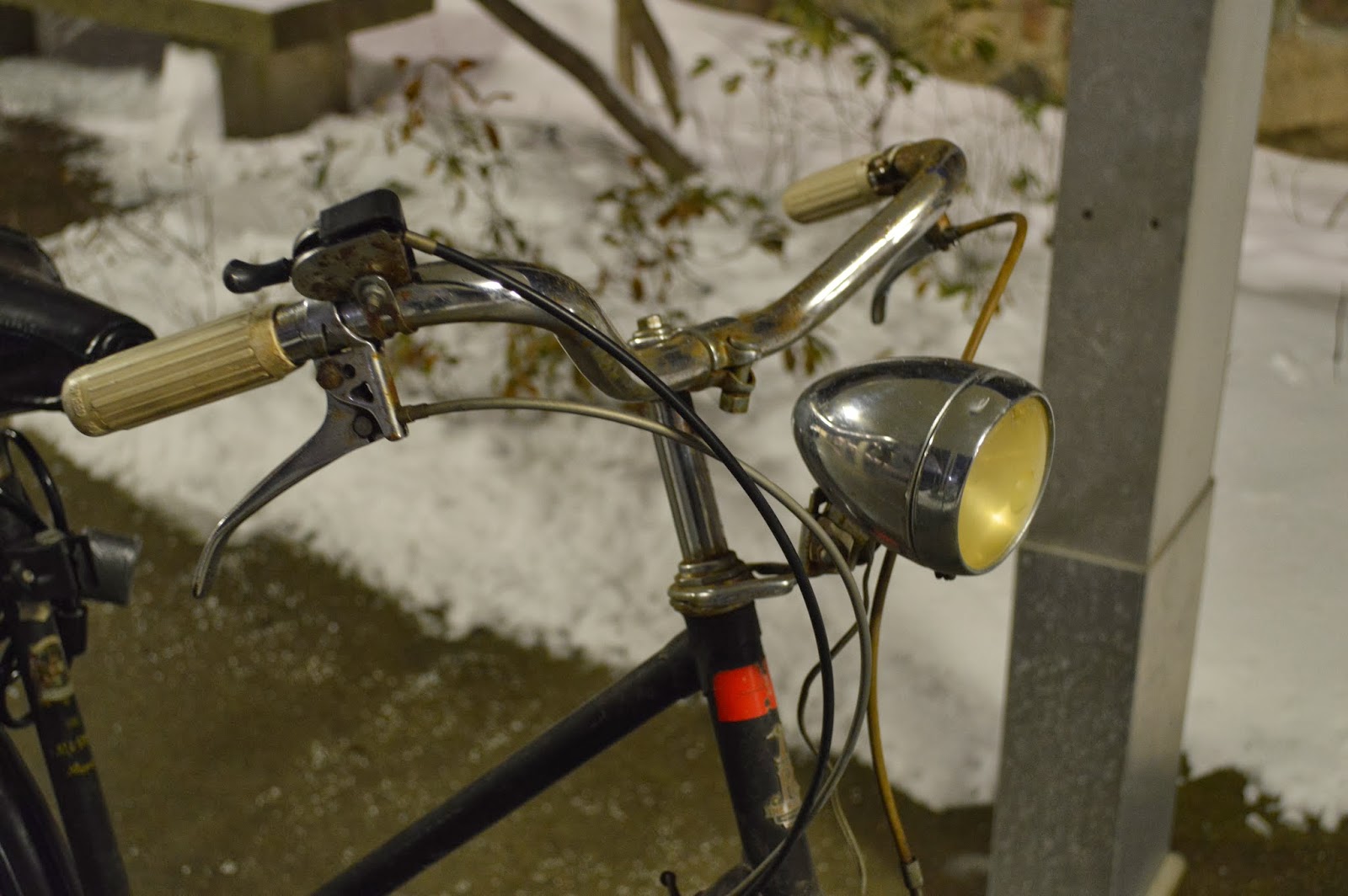 the rear hub after cleaning, couldn't get a good picture of the "58" 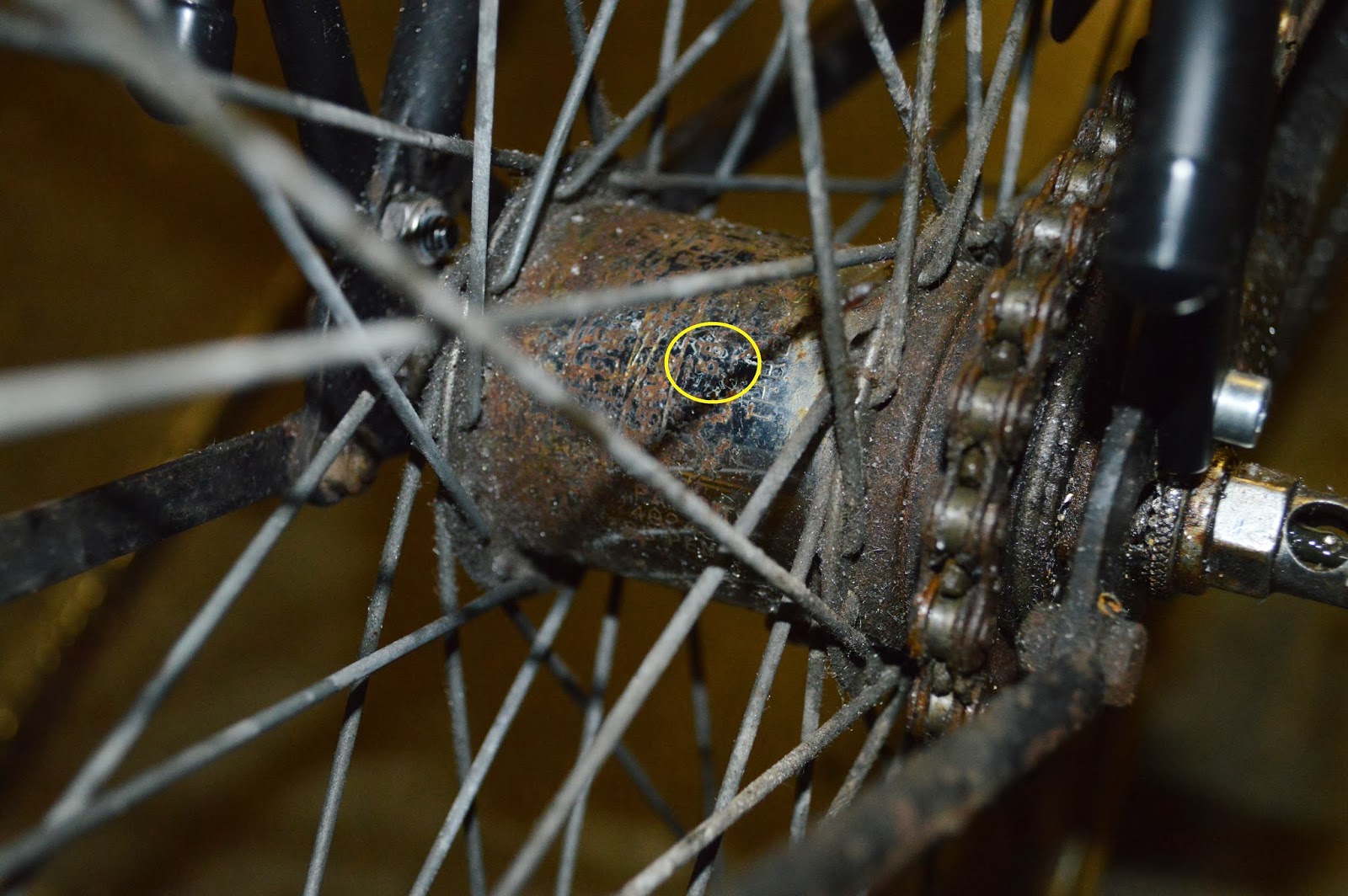 a before/after pic of the chrome

Posted by Frostbike at 9:43 AM

Nice find. Raleigh three-speeds are great bikes. I have purchased a number of decal sets from www.velocals.com.
They provide good service and their products are first-rate. They also can customize decals for different applications, for instance, if you want to clear-coat the frame after applying the decals. They also offer special UV coating if you plan to apply them on top of a new paint job.

Hey, thanks! This helps a lot.

Nice bike. I see you mentions that she is stuck in one speed. Try tightening the shifter cable, and make sure that there is oil in the hub as well. All hub parts are available through Harris as well as a lot of info written bey the late Sheldon Brown. Good luck with your classic bike. It is cheaper than a classic car, and just as addictive.

Jay: when cleaning the old chrome, try vinegar or WD 40 with aluminum foil instead of steel wool. Steel wool can scratch more than you'd like, and leave behind minute amounts of steel that actually rust worse later. Aluminum foil used as a rubbing cloth is like a miracle.

As to the paint, try rubbing with motor oil to see if that removes a lot of the grime. A lot of folks use Scratch-X from Meguirs to bring up the shine but it never seems to work for me.

I can vouch for velocals too - great decals and great service.

Thanks for all the replies, everyone! I am just now seeing these last two but long story short, after some tinkering and experimentation, I found the previous owner over-tightened the gear cable so what I thought was 2nd gear was actually 1st. I got all three gears to function! I did actually do much of my research on Brown's website as well. Also, I had been keeping the hub filled with oil ever since I got the bike and I recently learned somewhere that steel wool was not the best option and I will take your advice (markk900)!

Used BMW 325i Cars For Sale its very useful blog

great story. I wonder how long it was actually sitting there abandoned. yeah, Im posting this years after the fact but ya never know who might read this.