Mark sends in an unusual (to begin with) submission for the site.  He does a nice job of documenting the switch from external gears to internal, so I'll let him do the talking:

The bike is a 1971 Raleigh International - not something one would typically associate with an internally geared hub as it was second from the top of Raleigh's road bike lineup. The bike came to me built up in decidedly unoriginal fashion, with a wide range rear and a triple in front, among many other modifications to fit the frame out as a lightweight touring bike. At some point in its early life, the frame was repainted in burgundy, which I rather liked, and after digging into the restoration decided to stick with that hue.

Now, my original plan had been to keep the build as a light touring bike, but a number of factors led me down a different road. First off - and most importantly - I really don't like triples. After discovering that the wheels would need to be completely rebuilt, I thought about a 700c wheel set that I have hanging in the studio - CR-18 rims, with the rear built around a Sturmey-Archer SRF-3 hub. My thinking was that I'd temporarily build a club style three-speed until I got around to rebuilding the original wheels. This idea went by the wayside as soon as the "temporary" build was nearing completion. I fell immediately in love with the simplicity of the drive train and the clean, functional overall look.

Here is a photograph of the bike as it was when it first came to me. (After a bit of cleanup and detailing, and the addition of a vintage Carradice bag.) 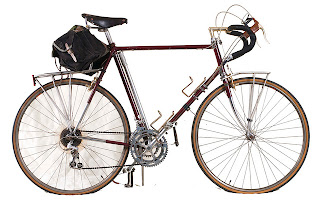 What is not clearly apparent in the previous photograph is just how beat up the paint had become. With so much bare metal showing, things had progressed well beyond "patina" or beausage! 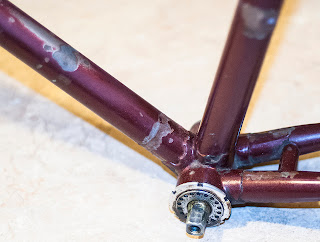 After stripping and repainting (by Groody Brothers), I initially built the bike up as shown here.  Aside from my distaste for the triple chainrings, I also realized that I had just built up a bike that was redundant - a duplication, in a sense, of another bike in my stable: a comfortable, long distance rider. Hmm, what to do, what to do? 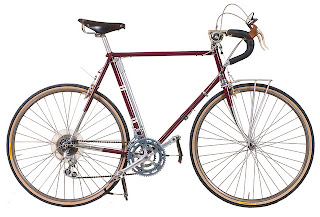 This is how I decided to move forward. 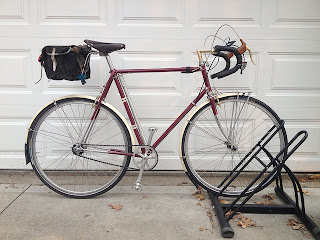 I prefer the riding position of drop bars, so I kept the rather lovely gold anodized Fiamme Milano bars and stem. The Mafac levers and center pull calipers function precisely and flawlessly, so they also remain. The saddle is a well broken in Brooks Pro, secured by a Campy seat pin. The original Campagnolo headset was rebuilt and re-installed. The front rack is a vintage Jim Blackburn and the rear Carradice is supported by a Bagman "knock off" that I fashioned myself. I added SKS Longboard fenders because I ride a lot, the roads aren't always dry, and bikes you intend to ride should be sensible. Fenders are sensible. The tires are not especially fast, but they are a comfy and bullet proof 700 x 38 size. And with a 42t chainring up front paired to the cog in back I wind up with nearly a perfect gear-inch match to the "normal" and low gears I use 95% of the time on my Boulder Brevet. Ultimately this has become a simpler and much more elegant rider configuration than what I started out to build - and I'm quite happy with the results.

If you're interested, here is a link to a more complete gallery of images, documenting the various components and stages of the build(s). http://www.flickr.com/photos/azorch/sets/72157631973929803/
Posted by Frostbike at 5:25 AM

One final note I will add about this particular build is that the 700 x 38 tires leave adequate room for the SKS Longboard fenders - but only just. A 32 might be a conservative, but more appropriate selection. I guess time will tell!

Nice! I really want to do this. I have two R-Internationals, one beautiful stock and the other powder coated and re-built almost as original. I'd love to convert to a IGH though.