Adam from New Jersey sends in some mystery bikes:


Hello, my name is Adam and I am a huge fan of bikes! I'm 36, so my orginal passion was getting into 80's freestyle bikes that my friends and I all wanted as kids.  I build them for myself and I also build lowrider bikes that I usually sell.  Recently word has gotten out about my hobby now everyone and the mother is asking me questions and trying to sell me stuff!  I have recently gotten into some older 3 speeds.  The reason I am telling you all this is because I don't want you to think that I am contacting you just to ask, "yo how much is my bike worth?" I don't care about that.  I already bought them and think I got a pretty good deal.  Like I said, I don't really know anything about three-speeds though and I found the three speed gallery page while trying to do some research on these two bikes.
A local scrapper knocked on my door asking, "I heard you buy bikes?" (my wonderful neighbor sent him my way!).  I said, "yeah, let me see what you got." He's an older guy and said the bikes belonged to his mom and dad.  They are matching blue his and her three speeds.  I was wondering if you could help me out with some history on them.  I've attached a few photos.  The woman's says "grantsport" and the man's says "Grants" on the headtubes.  My guess is that they were made for a department store? Like Free Spirit was sold for Sears.
If anything I hope you enjoy the photos and I've found a new sight to enjoy!

The always fabulous oldroads.com has some basic info:

These were sold by W.T. Grant or Grant City stores. The chain went out of business in 1975. Grant's was sort of a cross between a 5 & 10 store and an early K-Mart. They disappeared about the time that K-Mart's started popping up. K-Mart had originated from Grant's main competitor Kresge, and probably was one of the main contributors to there demise. 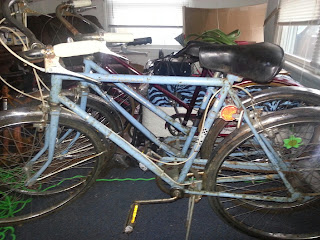 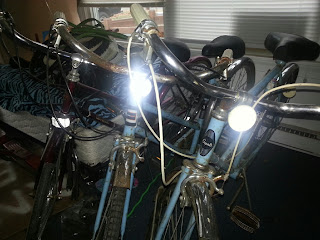 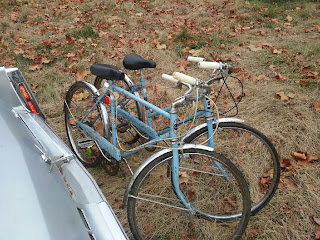 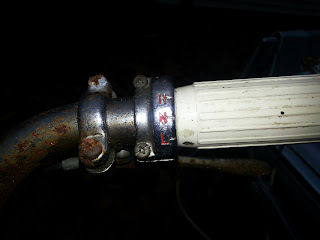 If anybody else has additional info, add it in the comments.

Posted by Frostbike at 1:18 PM

The grip shifters look like Sturmey Archer late 60s to 70s. You can confirm the year of a SA 3-speed hub by the two digit year code stamped on the hub shell. Wipe it down with a cloth and you should see it.

That is a Shimano 333 grip shift. I bet the hub has the same markings.

I have this on my wife's bike, the hub is a Sturmey Archer dated 1966.

Its on a raleigh, possibly superb. the handle has '333' marked on it.