John in Texas sends along a nice 1971 Hercules.

Wanted to share with you my 1971 Hercules.  Got it off Craigslist from a student who was going overseas, and it was pretty much as basket case when I got it.  He was asking too much, and as I walked away, he said 20 dollars, so I took it.  Took some time contemplating what to do with this mess of a bike, and finally decided to fix it up.  First cleaned off the multiple layers of grime and then rebuilt the bottom bracket, new crank cotters, new tires, tubes, rim strips.  As I progressed along, I was getting pleased with the look.  The rear fender (mudguard for us purists) posed a challenge as it left a huge gap between the tire and fender.  Played around with the fender stays, but was convinced they were not original, so I ground them down and re-drilled the mounting holes.  Found a NOS box of rear fender clips on eBay, and this solved the problem.  Do not know why, but I flipped the North Road bars for a sleeker look and found some vintage looking grips.  Needed a new fulcrum and fulcrum clip to make it shift correctly.  All in all, spent too much, more than the thing is worth, but it was fun!!! 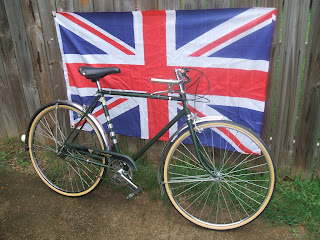 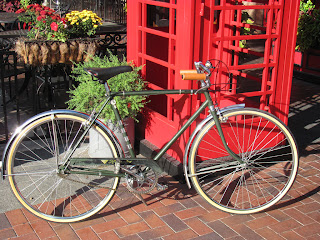 I only attached a couple of pictures of the finished product, but at John's flickr page there are multiple photos of the bike in it's original condition and through the tear-down and rebuild process.  Worth a trip over to see them all.
Posted by Frostbike at 2:38 PM

It is a beauty, worth all your hard work. These are very nice bikes, I have a '62 Hercules 3spd, I love it.

Did all these bit lies come with the electric motor on the rear tire?

Also, Josh, not sure what you are pointing to here. It could be any of two things - a bottle generator for headlights that runs off the side of the rear tire that many people used back in the day. I wouldn't be surprised if many of the bikes on this blog had them. Or are you looking at the fat diameter of the rear hub? in which case that IS the 3-speed hub. All gears are internal, protecting them from the elements. Sorry if I made any assumptions, I just know many people who keep asking me how I have a 3-speed when it clearly has one gear on the outside! Even my friend who rode my 3-speed, fell in love, asked for one, which I then built, couldn't explain it when his girlfriend asked - even after I'd explained it multiple times and even tore down a hub in front of him, haha. Not sure if you or anyone will read this, but cheers!