Anyhow, these are photos of my 1969 Robin Hood bicycle that I recently purchased off Craigslist. The price wasn't exactly a bargain, especially for this part of the country. But when I saw the condition it was in, combined with the fact that it's a 23" frame, I decided it was worth it. I doubt that this bike was ridden much at all. It looks nearly new. The Sturmey-Archer hub dates the bike to 1969 and there's a 1970 bicycle license sticker on the frame. The decals and paint are pristine, except for a few minor scuffs here and there. The Brooks mattress saddle is in great shape. It even has the original Dunlop tires. There's also a sticker on the bike from the shop that originally sold it -- Hall Bicycle Company in Cedar Rapids, Iowa. I searched on the name and amazingly, this store has been in business for over 100 years and is still open. The only problem is that this bike is so nice, I almost hate to ride it. I think it will be a fair-weather back-up bike to my Raleigh Sports. Vince 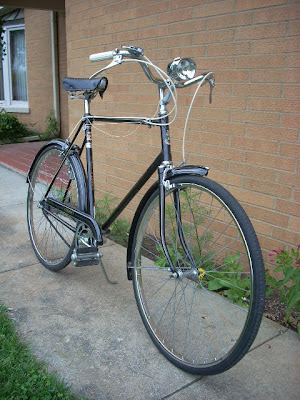 Great Bike. I use the exact same year Robin Hood as my every day rider, instead of my 54 Raleigh Roadster I pulled it out of a dump over 20 years. I was suppose to be my "rat" but I continue to restore her. Love the ride and love the decals and badge.