While working in a customers garage I chanced to look up, and see a bicycle in the rafters. I asked if he rode the bike often to which he answered. Not in years. He asked me if I had any idea what it was, and when I answered that I thought it looked like a late 60's- early 70's sears, he said it's yours. I told him that I could not accept it for free so he asked me for twenty dollars. It is a 1968 Sears All Original, and complete except for the pump. With the bike I also received the original bill of sale, owners manual, and parts list for both bicycle, and hub. The man was thrilled the next day when I let him know that I rode it for two hours the night I brought it home. It is a smooth ride, and the bell works great! 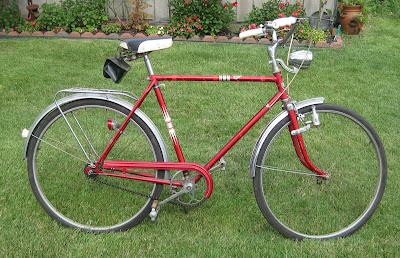 Posted by Frostbike at 2:41 PM

Your Sears three speed brings back many memories. In 1964 my dad bought me and my brother Sears three speeds that were made in Austria. They were both black. We received them for Christmas and I remember they were approximately $34.99 each in the Sears Catalog. It was magical getting these two bicycles for Christmas. I was 8 years old and my friend down the street had a Schwinn 3 speed so I had to have a 3 speed. There is nothing like receiving a bicycle at Christmas time when you are a child.

Thanks for sharing that memory. I remember my first bike 1967. It was a green Royce Union stingray. I remember
learning to ride that first day, falling and prying a pebble out of my forehead. I still have the slightest dent there. That was the last new bike I ever owned!
Every other bike was either a hand me down or a trash pick, and I used the hell out of them all!

Here's hoping that you still check the messages on this blog. I'm looking for info about a Sear bike, not unlike this one, though the shifter was on the frame and not at the handlebars. It had a light and generator and was in blue. I picked it up at a yard sale in 1986 for a 7-day bike trip when I was in scouts. Sadly, it was stolen 4 years later and I've never been able to find such a quality bike since.
Specifically, I'm looking for info about the shifter, as it was a three speed, however, I can't recall if it had an internal or external hub. And info you might be able to offer is greatly appreciated! (thinkmilly at gmail