Some guys get all the luck, as Jon's story shows.

One recent evening on eBay, I spotted a men's Raleigh Sports that appeared to be complete: $25 opening bid, no takers, in suburban Chicago (about a four-hour drive away), six minutes to go. It appeared to be a mid-70's DL-22, but what drew my attention was that it had the original vinyl seat bag, the identical bag which my Tourist lacked. So a quick call to my pal Andrew, who is currently restoring a 1951 Raleigh Superbe; bid $25 on it- if you win it, the bag is worth that and I will pay you in total- I get the bag, you get the bike, and we do another road trip like the earlier one to Cleveland to pick up my DL-1. With literally seconds left, no one else bid, so Andrew was the winning bidder on a complete men's Raleigh DL-22 Sports, essentially for free (minus gas, a day spent driving, and an Italian lunch in Orland Park, Illinois). It had been listed through one of those eBay seller storefronts, and when the young lady retrieved it for us, it looked a little less than impressive; rust pits on the handlebars, a broken aluminum kickstand, gumwall tires that had begun to melt and a thick layer of dirt over the whole thing. But it was straight, complete, and the bag was intact with all the straps attached and unbroken; he commented that the fenders were better than the ones on his Superbe, and it appeared that they would fit. I could see some scepticism, but when we returned, I suggested he leave it with me for a couple of days to breathe on a bit. If nothing else, he could part it out- I had already paid him the bid price of the whole bike for the saddle alone; the Raleigh 'R'-logo nuts and the Brooks mattress saddle would be worth enough to pay for gas and lunch. A day or two of wrenching, washing and rubbing produced the machine shown here- gratifying what a little Scotchbrite, naval jelly and attention to detail can produce. The Bronze Green paint was in remarkably good condition (reminds me of a paler version of Aston Martin Racing Green from the late '50's) and it came right up with a good coat of carnuba wax. Tightened the front hub cone, patched the tubes, aired up the remounted tires and took it down the street for a test run; with a little silicone lubricant, the Sturmey Archer AW shifted like new. When I gave it back to him, he was really pleased; parting it out is no longer on the agenda, and with a new set of Kenda gumwalls, he will have a Raleigh Sports that rides like new. The bag? It went to a shoe and luggage repair shop for duplicate straps and will also look like new when complete. Not bad for $25 and a tank of gas. Even better for free. 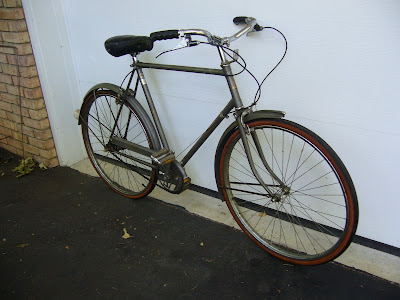 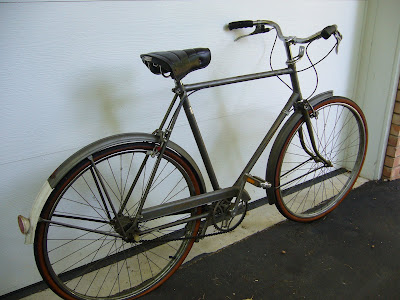 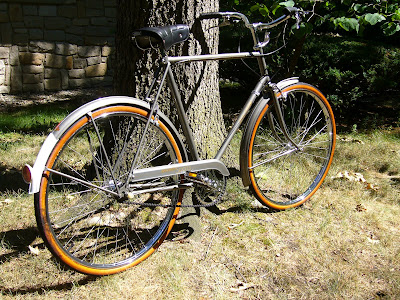 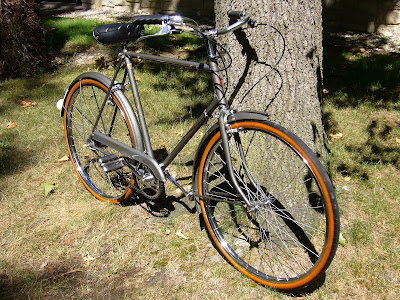 From John in Central Ohio:

Restoration work on Huffy Sun Country 3 speed bikes from 1975. The pair was surprisingly intact for 35-plus year old bikes. Rebuild was accomplished with all original parts save for tires, tubes, cable and pedals. These American-made bikes are every bit as much fun to restore & ride as their English counterparts *and* much more reasonably priced for American hobbyists (as in $15.00 each!).

John has a full set on flickr, should you wish to see more. The restoration was done very well, from what I can see. 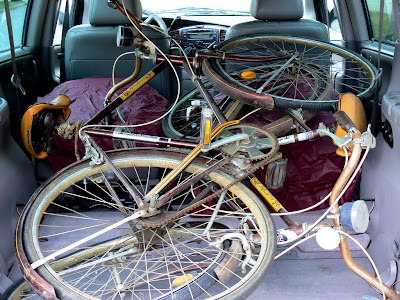 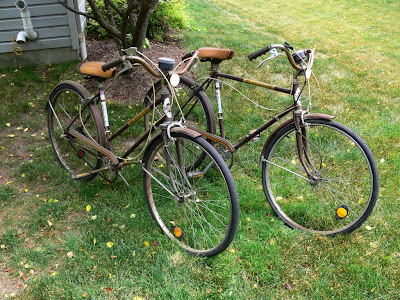 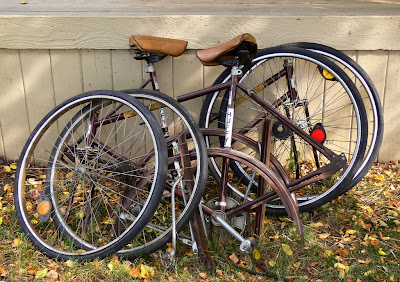 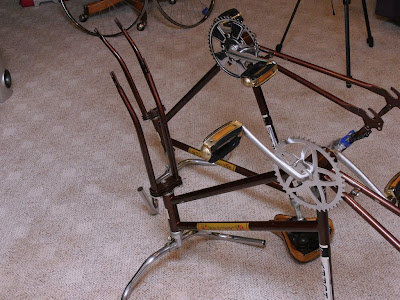 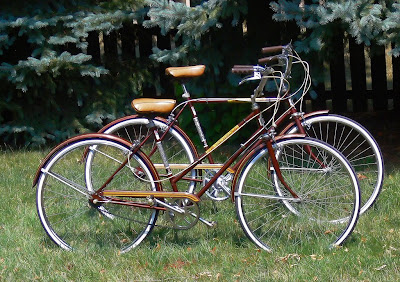 Hello, I just bought a bike for my son that we had no info on. After close inspection we discovered is from 1955, made in Germany, seal says Herald Cycle. As far as we can tell everything but the white grips is original. The white grips say Sears. It is a real nice looking smooth riding bike and everything is in working order. I was wondering if you know anything about it and where I can get it appraised in case we have to insure it… 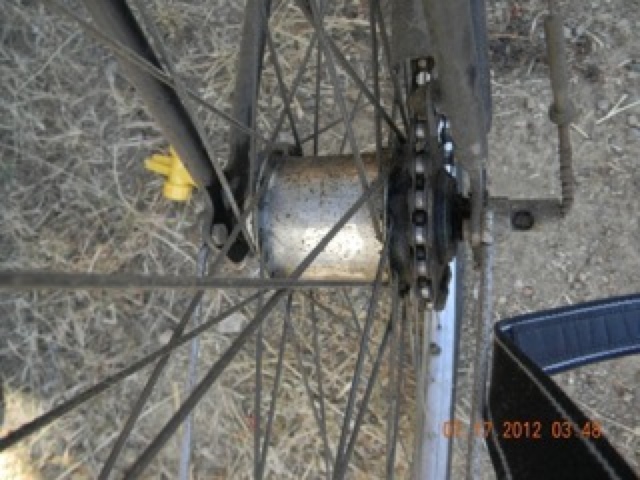 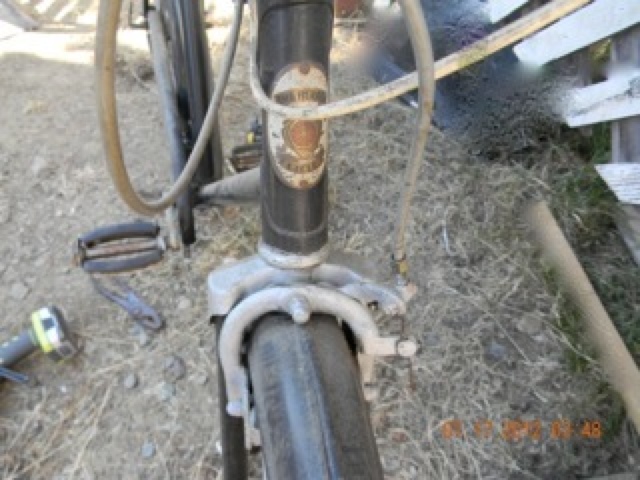 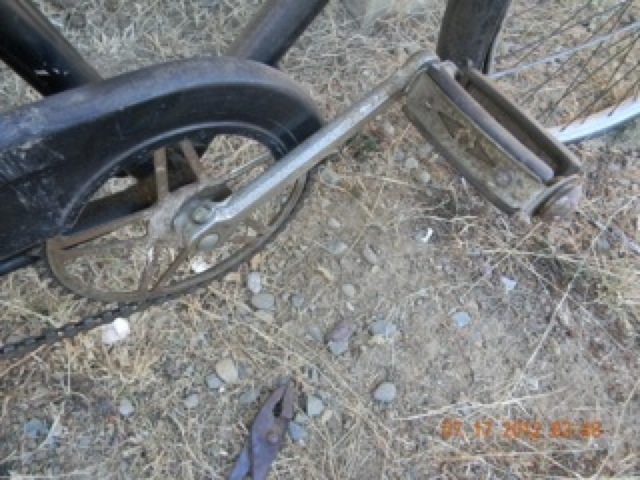 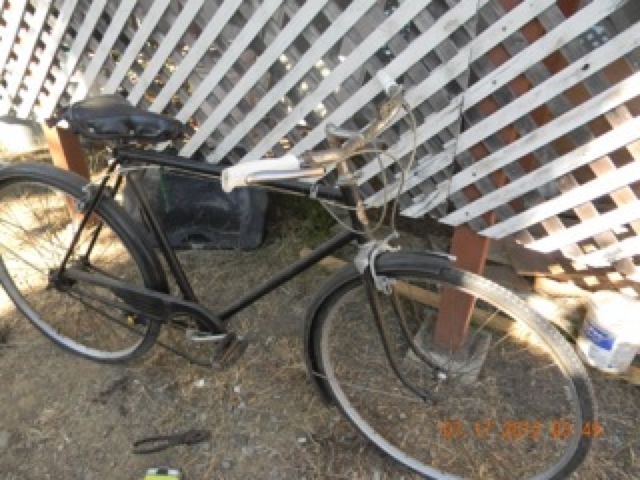 Posted by Frostbike at 8:04 PM No comments:

Tim sends along pictures and a very detailed description of a beautifully restored Raleigh. This one is worth viewing in the highest resolution you can, they have done a lovely job.

Clementine- our vintage Raleigh Cameo We discovered Clementine on craigslist and couldn't resist the lovely lines of this bike. She's a Raleigh Cameo ladies loop frame from the 1980s. While quite unusual in the US, the Cameo was a popular ladies bike in England. The Cameo shares the same graceful styling of the vintage Raleigh DL-1 step-through frame but adds a few modern conveniences- more reliable caliper brakes for wet weather riding, a smaller and more responsive frame, and significantly less weight, making hills climbing in Colorado much easier. Unfortunately, by the time Raleigh was selling the Cameo the production quality had deteriorated. The paint finish was typically poor, the chromed wheels and other pieces were prone to cracking and chipping, and the components were inferior to the earlier Raleigh Superbe and Sports models. Clementine suffered from all these maladies. A good cleaning and polishing served to expose all her faults, but we were charmed by her possibilities. Chipped paint and flaking chrome couldn't disguise her elegant frame geometry. And the smaller 26" frame size was a better fit for my wife than her DL-1 Tourist loop frame bike. So the decision was made to help Clementine achieve her full potential. I'm not usually a fan of "upgrading" vintage bicycles but, in this case, there was little of value to preserve. We started by removing the Chinese-made components and accessories. The decals were mostly missing, so nothing to preserve there. We decided to have the frame stripped and powder-coated a deep glossy black as a nod to her DL-1 heritage. These bikes were most common in white or a sort of maroon/plum color, but I think the sculptural shape would look great in any color. The style is very similar to the Pashley Poppy with its round chain guard and step-through frame. While Clementine was at the paint shop, we began selecting vintage Raleigh components to replace the original low-end equipment. The goal was to create the bike we thought should have been built, similar to Walter, our '67 Raleigh Sports Deluxe (submitted in January, 2011). Almost all the parts are vintage Raleigh Superbe or Sports components ca. 1968- Raleigh brakes with vintage ribbed cables, correct vintage round rear reflector, a really lovely '68 SA hub with the metal hinged port lid, Raleigh Sports chromed wheels, vintage Raleigh handlebar and stem with light bracket, and a slightly later set of vintage Raleigh pedals in like-new condition. We also substituted a vintage Raleigh 46t crankset for the original 48t crankset and changed the sprocket from the original 18t to 24t, all to make it easier to ride in hilly terrain. We considered adding a dynohub and light set to complete the look but, in the interest of keeping the weight down, we installed a new retro-style light instead. The saddle is a vintage black Brooks B72 that would have been standard on a Rudge or Raleigh Sports model. New grips, reproduction frame pump, chrome bell and Pletscher-style rack completed the look. At the end of this process, we have a bike with all the charm and grace of the Raleigh Tourist loop frame style but is lighter, quicker, more reliable and a better fit for the rider. Although it's not a pure restoration, we think she looks just right! 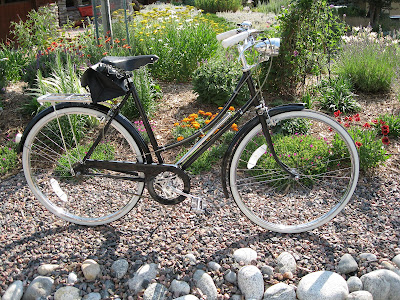 More pictures of Clementine can be see at: http://www.use.com/Vintage_Raleigh_Cameo_Loop_Frame_Bicycle
Posted by Frostbike at 8:06 AM 3 comments:

When Jon sent his Schwinn Traveller, I said it was a great story. But you (and I) ain't seen nothin' yet, as Jon just sent in his actual ride and the story behind that.

Here's the second part of the story... my Raleigh Tourist DL-1. This came from an eBay seller in Shaker Heights (Cleveland); it had been GIVEN to him by someone in the area, next door to a job he was contracting six blocks away, in University Heights- actually it was on the curb with the garbage (along with a companion women's Raleigh) to be taken away. The only reason the seller didn't take the other one was that he didn't want to be greedy. The only thing he knew about its previous ownership was that it has been stored for 30 years. Based on the hub date and the details, it appears to be a 1974 Tourist. My pal Andrew, who grew up in Cleveland, drove me there to get it. As soon as I got it back, Patrick, the new owner of my Traveler, took it, removed the 'Rampar' lighting set (installation looked like someone was decorating a Christmas tree) adjusted the cones, lubed everything and pronounced it good. I brought it home and spent a day detailing it; tires are a little cracked but good (original Raleigh/ Dunlop 28" 'Roadsters'), it has a few minor chips and scratches and some minor pitting on the rims, but the decals, chrome, paint, pin stripes all are excellent, even the paint INSIDE the fenders is clean and shiny. A few applications of Proofide on the saddle and we were good to go. What you see is the result; size (and style)-wise, this fits me MUCH better than the Traveler did, and clearly this bicycle has not seen high mileage. Riding one of these is different than riding smaller-framed 26" 3-speeds; you learn quickly to appreciate (and respect) the dual concepts of momentum and inertia, given the bigger frame, longer wheelbase, large 28" wheels and rod brakes. Ride quality is markedly more comfortable. On smooth, level pavement, in third gear, this thing is a real locomotive (again, inertia)- slower off the line than the Traveler was, and slower to stop, but higher cruise speeds- once you're moving, you are hauling. Its mass and stability impart an on-road confidence that smaller bikes don't. Learning the brakes takes a little feel, but once you're acclimated to them, they are entirely servicable for routine riding; as Patrick Sullivan advised me, you must be smart about braking. But for me, it's all about the styling. The faster head and seat tube angle, the bigger wheels and frame and longer wheelbase, the North Road handlebar set, and the Brooks B72 saddle all combine to give this bike a visual statement that is at once rakish and classic. Due to careful, deliberate proportions and excruciatingly correct details, it has the same subtle impact and British propriety that makes 'T'-series MGs, Vincent Black Shadows, Dunhill lighters and 'J'-Class yachts so beautiful to look at (and experience). The brake linkage brings to mind the valve linkages on a silver-plated clarinet I once played in grade school, and the Brooks saddle, in its timeless execution, is a design icon by itself. My only aesthetic criticism of this machine would be Raleigh's choice of graphic design in the mid-'70's; sometimes Marketing is its own worst enemy. But the pinstripes are great, and given the originality, no gripes. This worked out well; my friend Patrick got the Schwinn Traveler he sought and this Raleigh DL-1 is a perfect fit for me.

I can't disagree with anything written above. 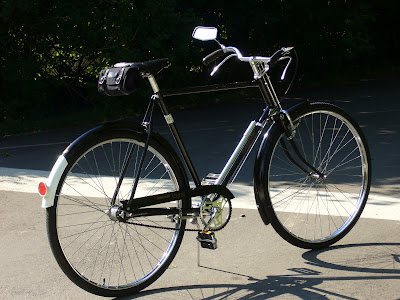 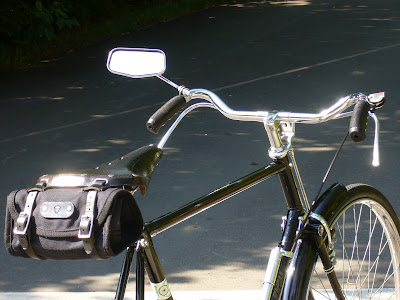 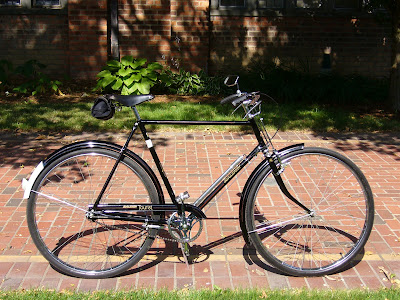 Posted by Frostbike at 6:41 AM No comments: