From John in central Ohio, a rare Huffy submission to the blog. But it's a 3-speed, so it's family. John provided some basic details of the rebuild process:

He also provided photos of the fully disassembled bike, which may be a first. 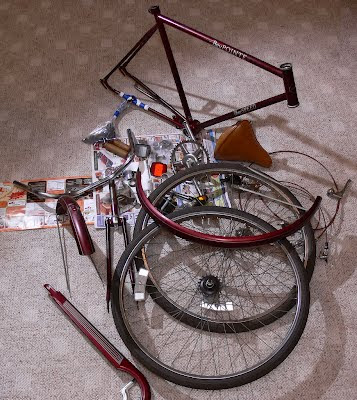 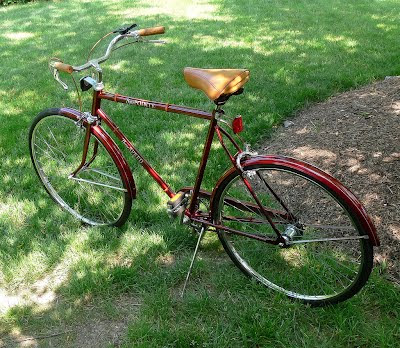 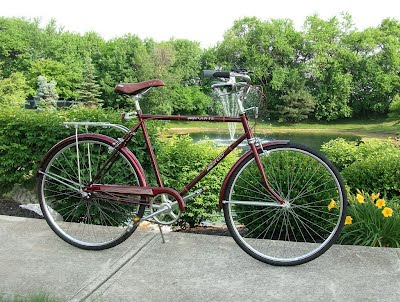 Lee submits another beautiful bike. This one is a more familiar English export. Lee says: I purchased my 1970 Raleigh DL-1 Tourist with rod brakes back in May 2011. Being a 1970 model myself, I was naturally drawn to the 41 year old, British gal. I would love to know some more of her history, but what I do know is she was born in Nottingham, spent some early years in Lakeland, FL (according to a bike license attached to her rear mudguard), and then somehow ended up in Oxford, MS. A Craigslist ad intrigued me enough to drive a fair distance and purchase this beauty from a gentlemen who flat out said that it was simply too big to ride. I had read about the size of these old British steel transportation bicycles but was still in awe when I first laid hands on it. She is tall, long, and stout but she feels good once astride the saddle. I slowly took her apart and cleaned her up. She is still sporting the original Brooks saddle, but I added new, cork grips and of course, new tubes and tires, even though what looked to be the originals still held air. Because of some rust concerns I did end up sanding and spraying the mudguards which made me a bit sad to lose the original patina. I will be taking her to a local bike shop to get a tune up fairly shortly because even though I was able to successfully clean my Raleigh and reassemble, I am no bicycle mechanic. I would have had a hard time painting over those fenders as well, but the end result looks good. Attached are one before and after photo of the cleanup job Lee did. Many more available at flickr, with many closeups for you. 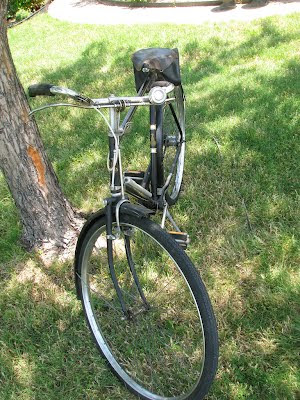 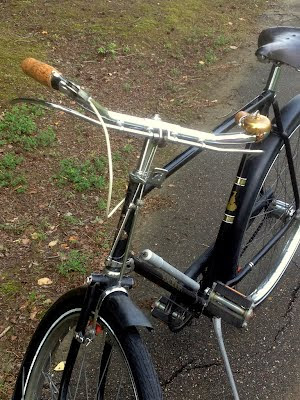 Then in the fall of 2011, I found this 1978 Schwinn Breeze with the same SA AW 3 speed rear hub as my Raleigh as I perused the Memphis Craigslist. Something about the gentle curve of the step-through frame in Schwinn's Flamboyant Red caught my eye. Wanting a bike for my wife, I went and looked at it and decided that I was up to the cleaning challenge once again. I knew the rust could be mostly removed from what I was sure would be some beautiful, chrome fenders. The wheels, however, would prove more challenging but I think she cleaned up very nicely for a girl in her mid-thirties. The only history I know about this bike is the original owner's son said it had been his mother's daily driver to her factory job for several years until the plant closed. At that point the Breeze was left dormant in the back corner of the carport/garage where the majority of the weathering was on the bottom of both wheels, one crank, and the kick stand. Maybe it is just me, but I think she is quite a looker and seems very petite when next to the DL-1.

Lee also includes a link to many more photos of this lovely bike. 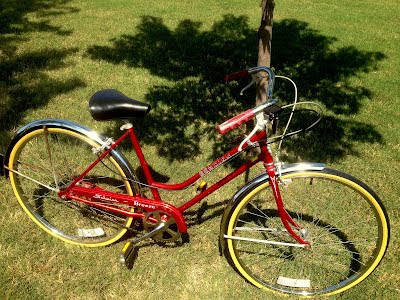 Posted by Frostbike at 6:09 PM No comments:

My favorite thing about Rudge bicycles is the front chainring. That hand symbol in the middle of the ring is cool. Jeff includes a picture that makes the chainring visible, plus a pretty neat story.

This is a 1953 women's Rudge that I recently received as a gift. The story is that this bicycle was purchased in 1953 by a woman who never owned a car. She bequeathed the bike to her neighbor who then brought to a local repair shop. This shop refused to work on it. I was more than happy to get it up and running again. The only newer parts that I can see are the pedals, and reflectors. It came with a large ugly aftermarket seat, but the original was in the basket. I've been riding it for the past two weeks, and she is a very smooth runner. I don't know if I will do more than a lube a cursory cleaning as she has so much MOJO as she is. I am thinking about a new leather saddle though. Best Regards Jeff 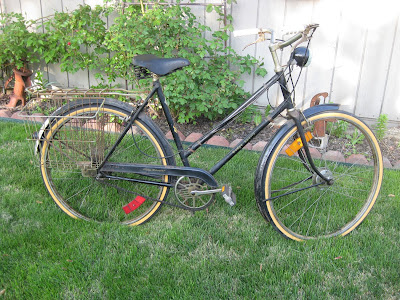