Time for a nice change of pace. Instead of the usual English models, Kevin sends some pictures of a 1975 Schwinn Speedster with a 3 speed hub. This one is his "daily driver" and gets used on a regular basis. There's something unique about a bike that gets ridden a lot, it just shows through. And I've got a soft spot for vintage Schwinns. Kevin says of the bike:

I recently acquired a 1975 Schwinn Speedster with a 1973
Sturmey Archer 3-speed hub. The bike featured a Schwinn approved rack
that had a basket attached, but I broke the rack on the second day of
ownership by overloading the basket. Not wanting the bike to lose the
additional charm that the rack & basket combo provided, I dug through
the used parts at the local bike CO-OP until I found a suitable
replacement rack. Then it was a simple matter of drilling a couple
holes in order to attach the basket.

The bottle generator and headlight still worked when I found the bike,
but the original tail light was broken, so I ordered a new one. My
commute home takes me down a big hill, and I'm pretty sure that front
lamp looks like a motorcycle headlight when I'm coasting at 30+ mph.

You might have noticed the front chain ring looks small. That's
because I swapped the original 44t chain ring for a 36t. That changed
the original gear range, which was around 50~90 gear inches, to 40~75
gear inches. It's made the bike much more versatile in a city that has
very uneven terrain. Since I finished fixing up this bike, I've been
logging about 50 miles per week on it, just from commuting, getting
groceries, and generally cruising around town. The only downside to
this bike, for me, is that it uses the 37-597 sized wheels. Only one
company makes tires (they come in black or gumwall) and there are no
options for tread pattern, whitewall, studs, and so on. My next goal
for this bike might be to retrofit some 37-590s onto it. 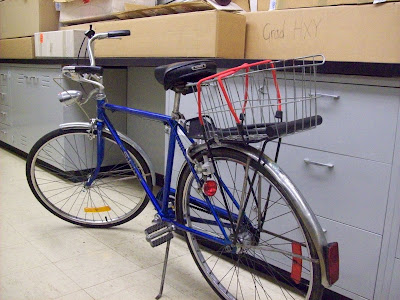 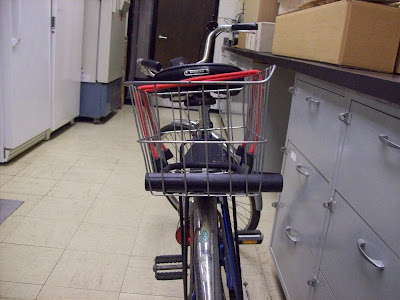 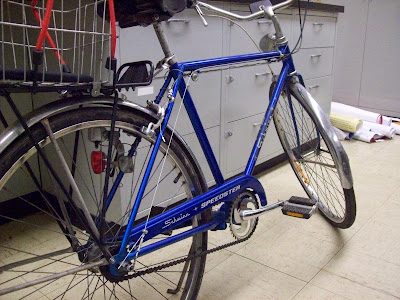 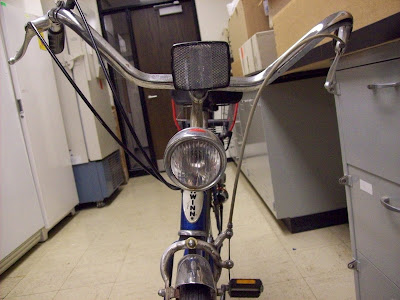 Thanks Kevin!
Posted by Frostbike at 6:47 AM 7 comments:

From Tim, and beautiful older 3 speed.

Winston is a 1955 Raleigh Sports that recently arrived in the US with a returning serviceman. The bike was purchased in rural England and was used almost continuously as a commuter vehicle. When we purchased the bike we could see that it had been protected in the traditional English manner- repeated coats of motor oil to protect against rust. Despite the discouraging exterior, we knew there was a treasure under all that grime.

Restoration included total dis-assembly and an intensive cleaning. While I don't recommend it, the oil coating did protect the bike. The painted frame and the chrome survived nearly intact under a thick layer of crud and responded nicely to careful cleaning and polishing. All parts are original with the exception of grips and new tires. The original grips were saved but too deteriorated to use so we replaced them with a set of vintage Raleigh grips from the 60s. This bike was ordered with a nice set of factory options- dynohub and light kit, Lucas cyclometer, upgraded Brooks B66 saddle and the Sturmey Archer switch-on dry battery unit that provides a standby lighting power source when the wheels aren't turning.

The bike looks and rides great after the rebuild and we're hoping it rolls along for another 55 years.

A complete set of photos can be found on use.com:

Nothing more to add, a lovely bike all around. 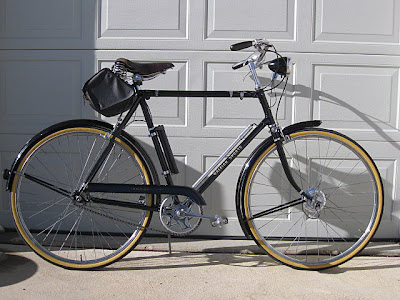 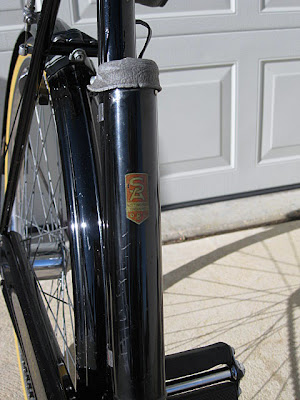 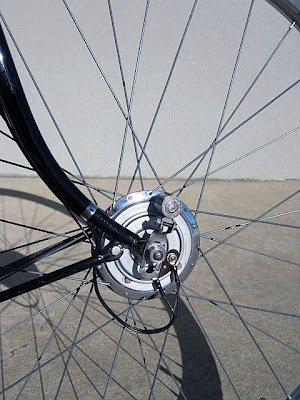