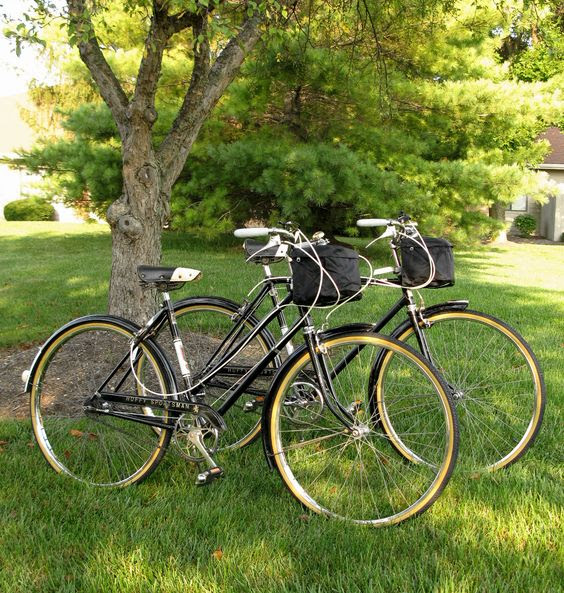 I've recently finished restoration on a matched pair of 60s-era Huffy Sportsman 3-speed bikes. The womens bike was located in Dayton, OH and the mens bike was purchased in Lancaster, OH. The date codes on the Sturmey Archer hubs show the mens bike as 1963 and the womens bike as 1964. I originally planned to restore the womans bike and keep it, but once the mens bike became available, I saw a chance to give a unique wedding gift to my nephew and his fiance--- they'll be married in early October. If you spot the newlyweds pedaling the streets of Cincinnati, say, Hi!". 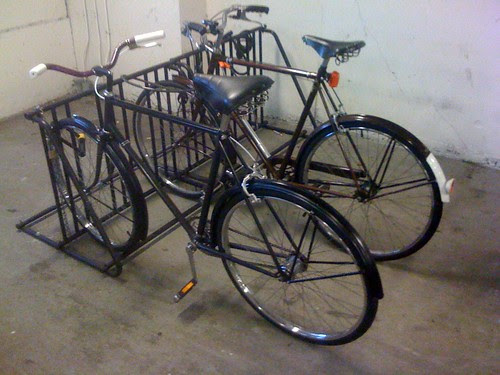 Good morning from Atlanta. Below is a pic of my 74 Raleigh Sports. Next to it is the same exact bike. I just happened to park next to this bike while visiting this downtown office building for a sales call. 3-speeds are becoming more and more popular in Atlanta. Four or five years ago, bicycle racks would be flooded with fixies. Not true anymore. People are steady trading in their fixed cogs for bicycles with more character and comfort. 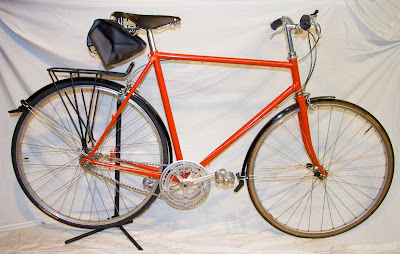 A friend directed me you your site to see his 3 Spires. Seeing people still ride old 3 speeds always puts a smile on my face and I am always amazed how many are still on campuses in Boston every Spring. About my bike, 3 speed enthusiasts love or hate my bike. Here is its story:

I bought a Raleigh Team USA frame for $15 back in the good old days before prices went crazy. I think it was two years ago. The seller gave me another frame from a discarded former single speed with a broken dropout and a bad brushed on paint job. This turned out to be the Dawes.

The cast rear dropout said Dawes and scraping off the paint the Reynolds 531 Butted frame tubes, stays and fork sticker was still clear and so was the blue faded paint job. The badly corroded brakes and cranks that were dated to 1984 and matched only one Dawes bike, an Atlantis.

Restoring it was impractical but it was too good not to fix so I decided to make it the cleanest 3 speed I could. I brought the frame to Circle A Cycles in Providence to have the dropout welded but they had a Campagnolo dropout without a derailleur hanger that matched the Dawes perfectly so it was meant to be. Since the bike would have no derailleur hanger and I was screwing it up I might as well add cable stops for the rear brake and the shift cable to eliminate the chrome cable clips.

Nitto supplied the stem via Harris Cyclery, the handlebars and brakes were from a mixte with a questionable past. The brakes and crank are Shimano 600 arabesque and when I find a chainguard I like I can get rid of the outside ring and chainguard. The rear rim is a Araya700c mounted to a Sturmey Archer AW and the front was a handy 700c Mavik that wasn’t attached to a bike. The seat is a Brooks B72 from the Raleigh Sport that donated the AW and just belongs on a 3 speed.

Now what to do with that 1948 Raleigh Rod Brake Dawn Tourist …….

If you like I can send a picture with the chainguard and a couple of other changes I plan.